Experience: Chichen Itza - An Ancient Marvel of Engineering and Architecture 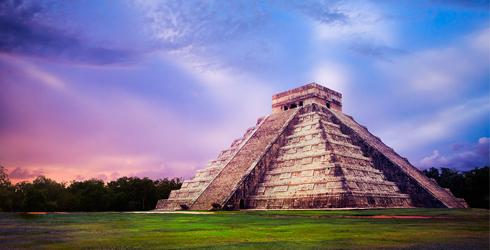 There is an immediate sense of awe upon seeing a site like Chichen Itza. The pyramids stand testament to an ancient people who accomplished spectacular feats of architecture and design even by today’s standards.

Upon arriving at the ancient city of Chichen Itza, Racek describes the initial sense of wonder: “Obviously the pyramids were spectacular. It’s like going to see the Great Wall of China: it’s amazing to stand there and feel the history.”

The Pyramid of Kukulkan is perhaps the most iconic structure at Chichen Itza; the one we see most in pictures of the great Mayan city. The pyramid bears the name of the feathered serpent god to which it was dedicated, and aside from its visual splendor, it is known for incredible occurrences that appear to be intentional consequences of its design.

For example, on the fall and spring equinoxes, a serpent formed by shadows can be seen descending the pyramid’s stairway on its way to the underground.

Racek describes another phenomenon at the Pyramid of Kukulkan that she took part in during her Liberty Travel Insider Experience: “There’s an area where you stand, in front of the pyramid, and you clap your hands, and it makes the sound of a bird” that was sacred to the Mayan people.

According to National Geographic, the “chir-roop” sound made by clapping in front of the pyramid mimics the cry of the quetzal, whose emerald green tail feathers were more valuable to the Mayans than gold.

“So you can stand on the grass in front of the pyramids and clap your hands together, and you can hear the bird call back,” Racek says. “It was an amazingly cool thing.”

How a Liberty Travel Insider Experience Takes It to Another Level

Racek outlines what really sets a Liberty Travel Insider Experience apart. “What I really loved about it was we arrived so early, it wasn’t crowded, and so it was like we almost had the ruins to ourselves for the first hour we were there.”

Connecting with a site is certainly more intimate when you’re part of a smaller, private group. Racek adds, “Ultimately, it was that feeling that we weren’t being shoved around,” which allowed for great photo opportunities and the ability to hear the tour guide, “because he was ‘our’ guide.”

She notes, “We were able to custom pace” the tour, which was important as Racek went with her aunt, who has difficulty walking. “We were able to keep pace without imposing on the rest of the group because the guide was there for us, and it was customized for us.

“When she got tired and I wasn’t yet, and I wanted to see some of the outbuildings, our guide was able to find my aunt a nice shady bench with a soda and we went onward,” and Racek was able to get back to her aunt at any time. “It was so convenient that way,” she says.

And when Racek was ready to leave earlier than required because her aunt was tired, the guide was happy to oblige, and he led them back to the pick-up point for the van ride back.

Speaking of the guide, Racek gushes, “He was amazing — incredible knowledge. Our guide had a master’s in archaeology. He was a wealth of information…as well as the speculation, because there is so much unknown about the ruins and there’s a lot of speculation as to what they were used for.”

She says the guide was easy to understand and was incredibly attentive — so much so that when Racek and her aunt conversed on the way about their hotel wanting to charge them $20 for some sunblock, the guide took them to a small drugstore on the way to Chichen Itza where they were able to buy sunblock for $5 instead.

“He was one of the best guides I’ve had,” says Racek, who has toured with many of the major tour companies as well as with different cruise lines that send guests out with a guide. “He was able to customize what we needed for the tour, like when my aunt needed to sit, or if we needed a break on the ride down.”

Seeing Chichen Itza as a Liberty Travel Insider Experience worked out perfectly for Racek, particularly with her aunt’s difficulty walking. Says Racek, “It was ideal in that situation, and I can see it being ideal for families with young children, or somebody with a disability, or someone who just doesn’t want to wait for the whole tour and doesn’t want to be locked into the group, because we were not locked into the group.”