The Wizarding World of Harry Potter Guide for Non-Nerds

Or, The Care and Keeping of Your Nerd at Universal Orlando

If you’re not a huge Harry Potter fan, all the excitement and fuss surrounding the Wizarding World of Harry Potter might have you a little confused. Don’t worry, we’re going to get you through this, whether you’re visiting with a friend or family member or just want to see what it’s all about for yourself.

First of all, if you’re with a Harry Potter fan (or Potterhead, as some of them like to be called), don’t panic if they seem a bit overwhelmed. In all likelihood, they’ve been dreaming of stepping into this world for many years, and this is the closest they’ve ever come (and probably ever will). Let them run around excitedly staring into shop windows (even if the inside of the shop is actually inaccessible, the windows are still marvelous) until they’ve worn themselves out. Maybe get them a butterbeer to sip on while they collect themselves – they’ll need something cool to bring them back to reality.

Universal Orlando is made up of two distinct parks, Islands of Adventure (home of Hogsmeade and Hogwarts Castle) and Universal Studios Florida (where you’ll find Diagon Alley). To get the full Harry Potter experience, you’ll need a park-to-park ticket, which lets you go between the two sides on the same day. Luckily there’s a way of traveling between the two that’s way more fun than walking.

Start your day on the Universal Studios side, with Diagon Alley – it just opened last year, and is the more popular side right now, so you’ll want to be in before it gets too crowded (it’s helpful to stay on property, as that will get you into the parks an hour before general admission begins). Don’t be overly concerned if your nerd goes into rhapsodic shock upon seeing the entryway – it’s just the first of many touches pulled straight from the books.

Guide your nerd gently toward Harry Potter and the Escape from Gringotts – it’s the newest ride, so the lines can get long, and it has a tendency to break down occasionally. Since every breakdown requires an 18-minute restarting protocol, you’ll want to be through there as soon as possible. If you don’t recognize some of the more minor characters, don’t worry about it too much – the effects more than make up for any confusion.

When you emerge back into the sunlight, hop the Hogwarts Express for a quick ride to the other park. In the series, this is the train that takes Harry Potter and his classmates to and from school. Here, technology and creativity have come together to create an immersive journey that will astonish even those with only a passing knowledge of the series. 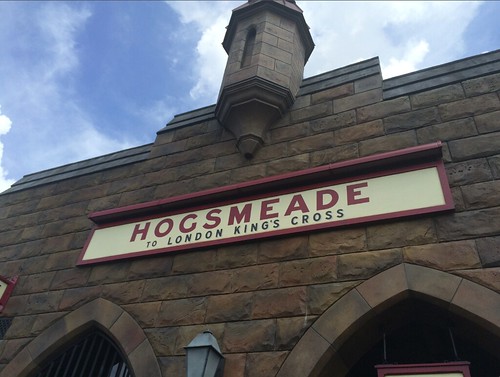 You’ll arrive just outside the gates of Hogsmeade, the village outside of Hogwarts. Follow the crowds up towards the castle to ride Harry Potter and the Forbidden Journey, a less plot-based ride that serves as an excellent primer on the characters, creatures, and setting of this magical world.

After completing the Forbidden Journey, congratulations, you’ve tackled the two major attractions of the Wizarding World of Harry Potter. There are a few more rides, namely Dragon Challenge and Flight of the Hippogriff, which are full-size dueling coasters and a family-friendly coaster, respectively. Beyond that, though, this world is all about the shops and the whole experience. In Hogsmeade, you can try some authentic English pub fare at the Three Broomsticks, visit Dervish & Banges, a shop that supplies and repairs magical equipment, or buy some magical candy at Honeyduke’s. When you’re finished in this side of the park, return to Diagon Alley (by train, again – don’t worry, the show is different each way) and explore it further.

From the biggest displays (like the dragon perched atop the bank) to the smallest touches (like hearing Moaning Myrtle in the Hogsmeade restrooms) to the entertainment, it’s clear that this world was created by and for people who care deeply about it. Your nerd will fall in love, and even your Muggle heart might melt a bit.